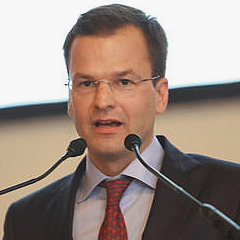 is the founding partner of the firm and advokát admitted to the Bars in Czechia (1993), Slovakia (2003) and as registered euroadvocate/Rechtsanwalt in Austria (2021).

For 30 years, after completing his studies at the Law Faculty of Charles University in Prague in (1991), followed by post-graduate legal studies and working stays abroad, he continues his legal practice as advokát. He was an equity partner of the law firm Linklaters LLP before establishing Mareš Partners (2003). He specializes on business law agenda of our clients and arbitration.

He has been an arbitrator of the permanent Arbitration Court attached to the Economic Chamber of the Czech Republic and Agricultural Chamber of the Czech Republic, the only permanent arbitration court with a full jurisdiction in Czechia. He has served as a member of its Board, and also currently as its Vice-President, for several consecutive terms of office (2010-2023).

Over the years, he has been an arbitrator in more than 200 commercial arbitrations in Prague, Bratislava, Vienna, Zurich, Paris, Warsaw, Budapest, Moscow and London. He is listed on the roster of several permanent arbitration institutions in Europe and the International Centre for Settlement of Investment Disputes (ICSID) in Washington D.C. for several consecutive terms of office (2013-2027).